As told to Blanche Shannahan in 1959 by George Johnson

“A couple of men, brothers, came to the valley in the mid-eighties. Their name was Hewlin. They rented the Billy Baldwin place, which lay between Harriman’s south forty and the river just north of Koniat Creek. At that time there were no mowing machines – all hay and grain was cut by hand with scythes. Mr. [William] Tester who had a large acreage of hay, employed many men at harvest time. The Hewlins went to obtain work and Tester hired them. In talking with them and in response to the statement that they considered themselves top men, Tester replied that he considered Johnny Jimmicum the best man with a scythe in the area. Hewlin replied that that may have been the case in the past but that it was no longer, for he and his brother could outdo any squat Indian and for that matter probably any white man would find it hard to equal them. The Hewlins certainly were not modest. 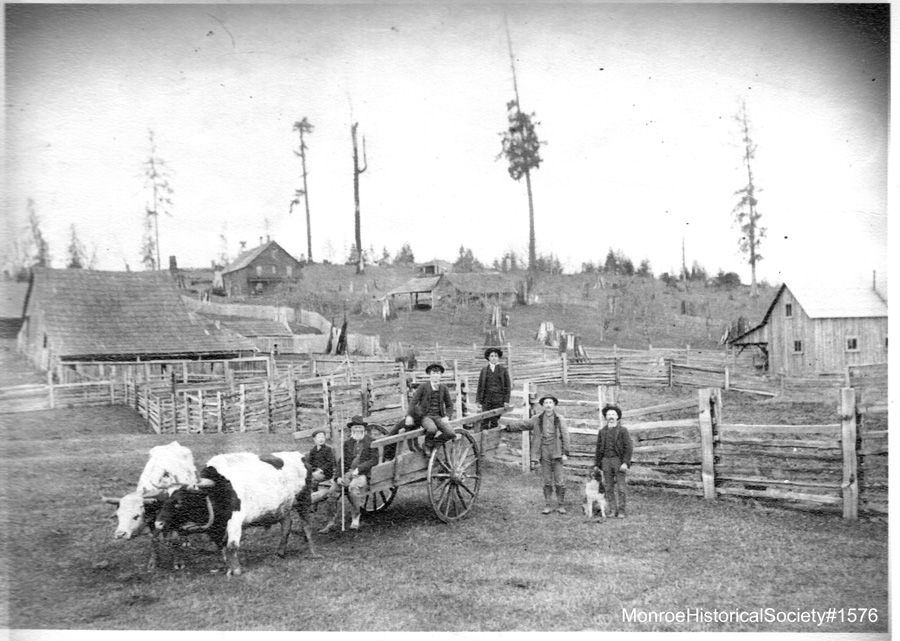 William Tester, on wagon, at his 500 acre ranch

Word got to Johnny that he was to have competition, that the Hewlins were after his record. Johnny made no comment. Came the evening before the haying was to begin and Johnny went over the river to Tester’s place, looked over the scythes and chose the one he had always used. He sharpened it carefully and hid it away from the others. It was told that scythe had certain balance and that a short man could not use the scythes built for a tall man; also that the weight of the scythe was as important as the balance.

Johnny arrived first and touched up the scythe blade and cut a few swaths to loosen up his muscles. He was ready to go. The others arrived, there was a pleasant banter, a friendly atmosphere pervaded the scene. The Hewlins swaggered in last, grabbed a schythe each and shouted “Come and catch us if you can” and started off, bent on showing their superior ability. The others swung into line, Johnny among them. It was soon evident that the race was on. The Hewlins were soon far in front. Johnny mowed calmly and steadily, but the set of his shoulders told that he was determined to win. The sun rose higher and the day grew warmer. At the end of the first hour the distance separating the rivals hadn’t changed. The whole group worked steadily on; an occasional pleasantry was exchanged. During the second hour the Hewlins began to breathe more heavily and to glance around. Johnny moved on as calmly as before. Then came a break for a short rest and a drink of water. Hewlin and his brother drank deeply. Their exuberance was plain to see.

After a short rest all picked up their tools and went back to mowing. The Hewlins swung ahead again but some of their arrogance was gone. Johnny decided now the time had come to act. He swung at the same rhythm but at a greater speed. The air grew tense. Within the hour he had overtaken the brothers and the next quarter hour saw him sail easily ahead, and each stroke widened the distance separating them. The cheers of the other workers rang out. Hewlin and his brother threw down their scythes and departed for home. The cheers changed to jeers as they headed for their canoe, then back to cheers for Johnny. That night and for years after the tale was told over and over again.”

The William Tester place was a 500 acre ranch on the north side of the forks, where the Snoqualmie and Skykomish rivers join to form the Snohomish.