On Nov. 12, 1869, George Allan and others formally requested that a new county school district be formed along the King County line at Park Place. This was the beginning of public education in the Monroe area. The new district was duly formed on Nov. 23 as School District No. 2, the second school district to be formed in Snohomish County. The first had been formed at Snohomish on May 7, 1865.

The idea of public eduation was important to the early settlers of Snohomish County. In 1861, the year the county was formed, a school tax was levied although there were no pioneer children yet living in the county. As the settler population increased, local school districts were formed where there were enough children to support a school. Funding came from county and state sources as well as from the parents. At first, classes were usually held in someone’s home. Initially attendance was low and terms were short in part because children were needed to work at home and on the farm and because the school was often several miles distant.

On November 1, 1869, E. C. Ferguson, the clerk for the Snohomish School District made his annual report to the first County Superintendent of Schools, Henry McClurg of Park Place. Ferguson wrote: I herewith submit my yearly report as the law directs. A school has been kept in the district by a qualified teacher for a term of three months. During the past season, the attendance was very small in proportion to the number of scholars in said district, say about one-fifth, all of which were in the primary class. The amount of wages paid for the term in legal tender was $188.59. No other moneys have been expended from the school fund during the past year.

On Nov. 9, 1870, George Harriman the clerk for the Park Place School District reported that no school had been held during 1870 although there were 14 school-age children in the district. Snohomish had held school for a term of six months that year with 18 in attendance out of a possible 47 school-age children. County school funds were divided between the two districts with Snohomish receiving $296.71 and Park Place $119.60. Henry McClurg as County Superintendent of Schools received $25.

In 1874, the first school building in the county was constructed in Snohomish on donated land at a cost of $700 in county funds. Two years later in 1876, three other county school districts built school buildings including Park Place, but these were paid for by local subscription. The number of school districts in the county had increased to eight including one more in the Monroe area, Tualco School District No. 7. (As School Districts divided, merged and reorganized, their county number would change, which can make the tracing of one school district through public records difficult. For example, the Tualco District later became No. 8 and No. 12.)

In 1889, County Superintendent of Schools J. W. Heffner reviewed early county school history and wrote in part: District No. 2 (Park Place) was formed from District No. 1 in 1869. In 1879 it had twenty pupils, while in 1889, there were forty-two. The district has a schoolhouse which is also used as a church, and has levied a tax for a $500 building. District 7, Tualco, has a schoolhouse which cost $750, which will soon be provided with patent seats.

During the first decade of the twentieth century Monroe grew rapidly and in 1911, a handsome new two-story brick schoolhouse was built in the Park Place area and was in use until 1955 when the new Frank Wagner Elementary School was opened a half-mile to the east.

–from the History of Snohomish County, Washington, edited by W. M. Whitfield, 1926,
and from information compiled by Bill Wojciechowski. 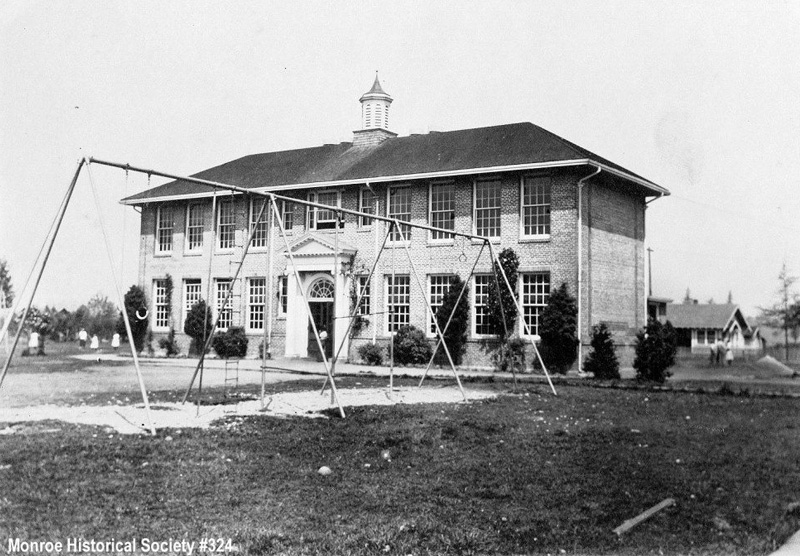