Saga of the Bridges

Transportation has always played a big part in the lives of men, and opportunities for travel have had much to do with successful settlement of any new land. So it was in the case of the Snohomish River and its tributaries. This river system afforded ready access to the valleys from the sea in the latter half of the nineteenth century. The products of the forest—the logs, the shingle bolts, the ship knees—were floated down the rivers to market or to the tugs that hauled them to more distant places. Baled hay from the farms was piled on the platforms fastened across the [gun]wales of groups of canoes, and the Indians poled and paddled them to their destination. Later, steamboats came up the river carrying on a lucrative freight and passenger service.

As the time passed, horses became plentiful; wagons and carriages were available; roads were built. Then it was that the rivers became barriers to transportation. Ferries were established and did very well for a while, but eventually it became evident that bridges must be built. The Pattison Ferry crossed the river from Park Place to the Rufus Pattison homestead on the south bank. It made possible passage from the farms in Tualco Valley to Park Place and from there by road to Snohomish. It was installed in 1882 and continued in use till 1894 when the first Monroe Bridge was completed.

When in 1892 Jim Hill started his railroad from “St. Paul to Saltwater,” Park Place was a thriving little village, consisting of two taverns and hotels, a general store, Post Office, a blacksmith shop, a butcher shop, a grocery store, school and a large community hall. There was much speculation and wild dreams of money to be made when the railroad came. But, alas, the station was built a mile or more to the east and north. A new townsite, Tye City, was platted; the future of Park Place was not bright. However, the pioneers were not easily discouraged. They did the wise thing. Rollers were placed under the buildings and the trusty oxen supplied the motive power. Within the year the exodus was complete.

Then came the realization that the Pattison Ferry was no longer a desirable means of crossing the river. The building of the bridges across the Skykomish at Sultan in1890 and in Snohomish in 1891 prompted the settlers in Monroe, as the new town was named to work for a bridge at that place. In 1893 the contract was let. It called for a span across the main channel 150 feet in length, and another about half that length across the slough. They were to be connected by a trestle of piles and planks across the island, 300 feet long and 20 feet high. It was a big undertaking.

A huge tent and many smaller ones were erected to accommodate the workmen. James Stirton was the engineer and superintendent on the job; his wife ran the cook house. The bridge was built of wood with steel rods to strengthen the girders. The piers were of heavy sawed timbers built in the form of a rectangle. They were filled with rock brought from the hillside north of High Rock. [The rock] was dragged on sleds across the flat and taken down river on scows to the .bridge site. This was hard work and the men rejoiced when the last rock was placed in the north pier. They went into dinner and when they returned [all] the rock was gone. The timbers had parted under the water line and the rocks had rolled into the center of the river bed. All that work to do over!

A second disaster came a few months later. The Panic of 1895 began to be felt in the Northwest and the company [building the bridge] went into bankruptcy. Work stopped all winter. Finally the financial problems were solved, the men paid , and work began [again]. James Stirton, himself later said that he never received a dollar for his year’s work; and that, in addition, he and his wife had to feed some of the crew all winter.

In 1894 the bridge was completed. A celebration was planned. Wrestling and boxing matches were arranged. A couple of barrels of beer were placed below the approach. Mr. Thomas Tucker, one of the carpenters, laid a fine lumber floor over the planks of the main span and waxed it for dancing. Evergreen branches were nailed to the wooden sides and top of the superstructure. The guests, many of whom came a long way, hung their lanterns to give light. Local fiddlers supplied the music. One of my informants stated that the celebration lasted a week, another said it was ten days. It was a grand celebration. Even the hour-long oration by Mr. Barnes did not dampen the spirits of the revelers.

Twenty years and several floods later it became necessary to replace this bridge [it was, however, rebuilt in 1905 with a second, smaller truss, and while it was closed, Ross Evans ran a ferry service]. In 1915 a steel span was erected by the American Bridge Company parallel to the old one on the east side. The old sign, “Fifty dollars fine for riding or driving over this bridge faster than a walk” were gone. It was a fine bridge, but many were unhappy with it, because the crooked approaches that were necessary to connect with the trestle and the existing street were, to quote one man “as crooked as a dog’s hind leg.”

I have not been able to find a record of the dedication of this bridge. May be there was none. It was the year that the county built miles and miles of paved roads. Could be they didn’t have time for celebrating. The years brought many more changes. What had been a fine bridge in 1915, was inadequate to cope with the punishment dealt by the heavy trucks and trailers. Townsmen complained of wakeful nights due to rattling planks. They were replace many times, but the vibration always worked them loose.

As the result of much hard work on the part of interested citizens and the road committees, a third bridge was built recently. This one is situated many feet to the west of the former structure. The trestle was replaced by a rock and gravel fill; the spans were constructed of cement and steel. It is a beautiful strong bridge, one which we are proud. The dedication took place in 1957. No more than seventy-five witnessed it. The school band played; a very, very short congratulatory speech was made; a snip of the scissors and traffic flowed. No prize fights, no long orations, no dancing, and no beer! Such is the price of Progress! 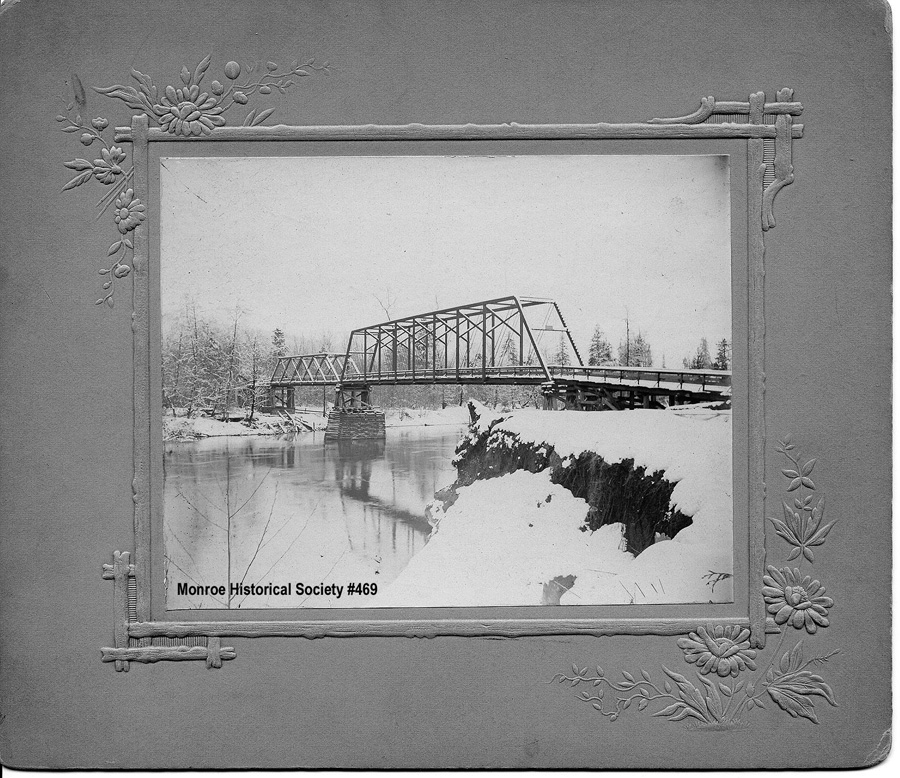 1894 Wagon Bridge over the Skykomish Rivier at Lewis Street 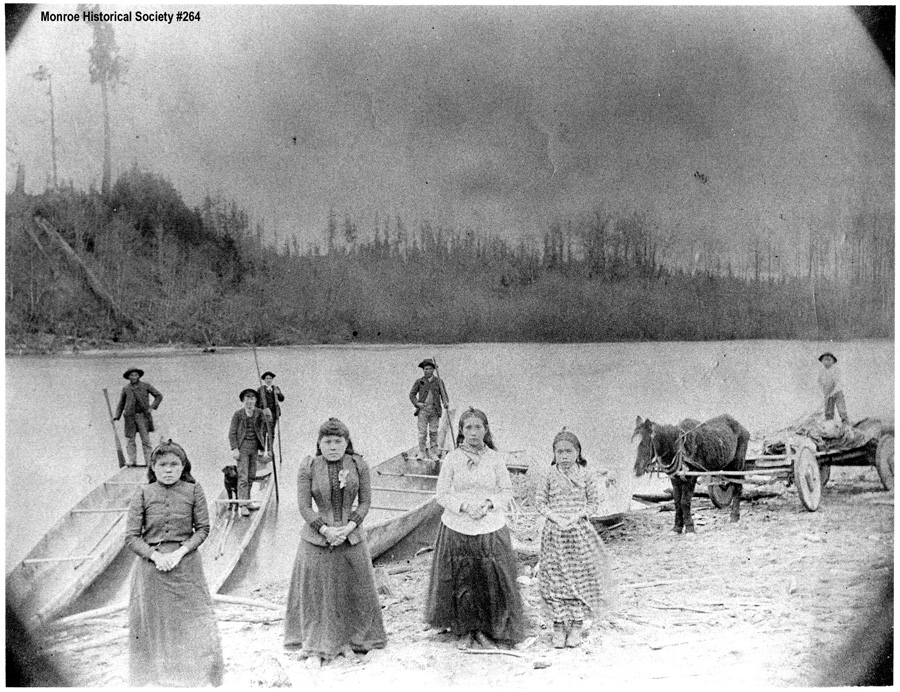 The Jimmicum Family with canoes on the river c1892 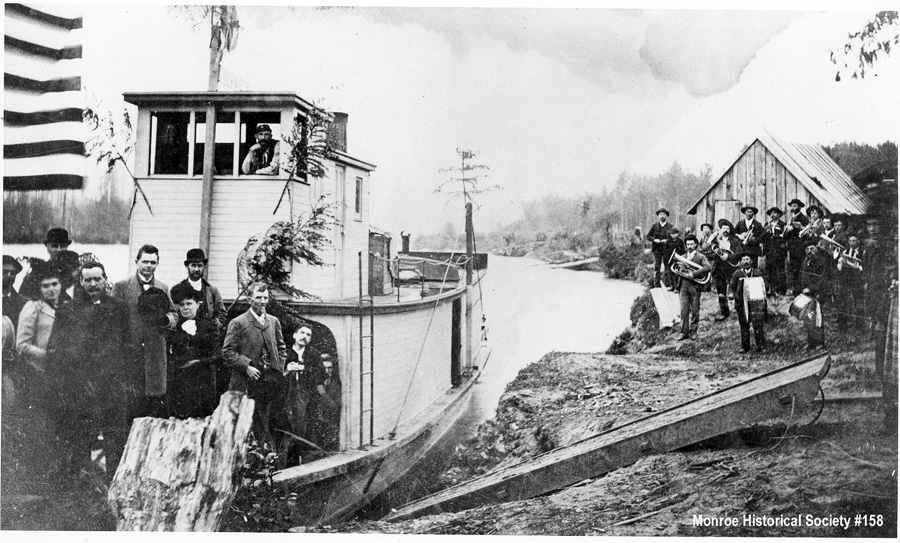 Steamer ‘Minnie M” welcomed by the band at Sultan in 1892 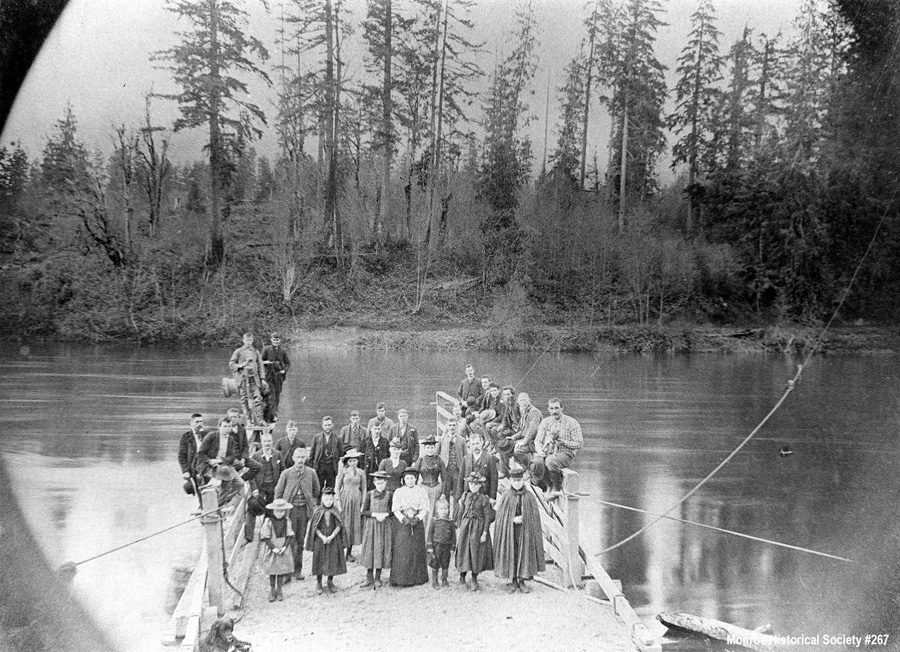 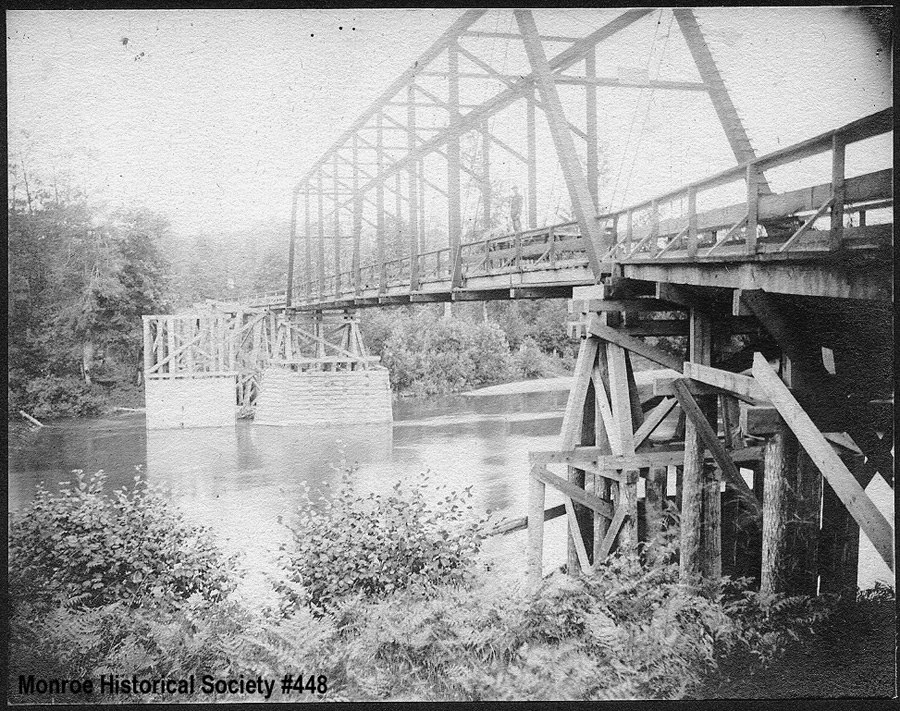 The first bridge across the Skykomish River at Monroe 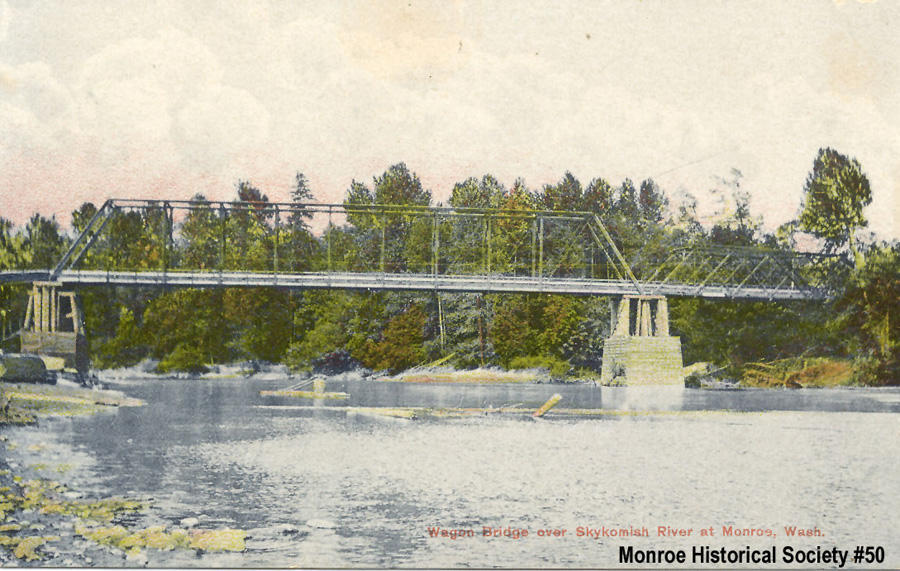 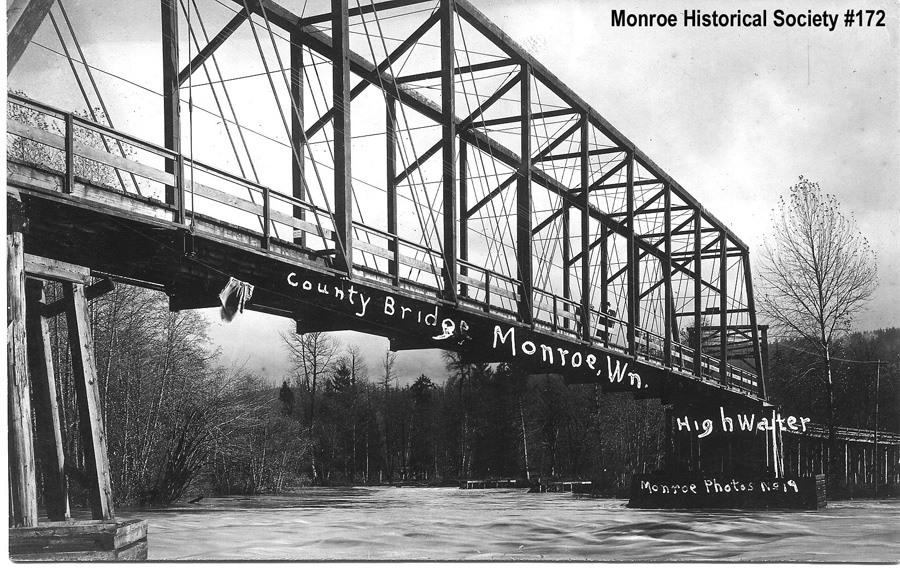 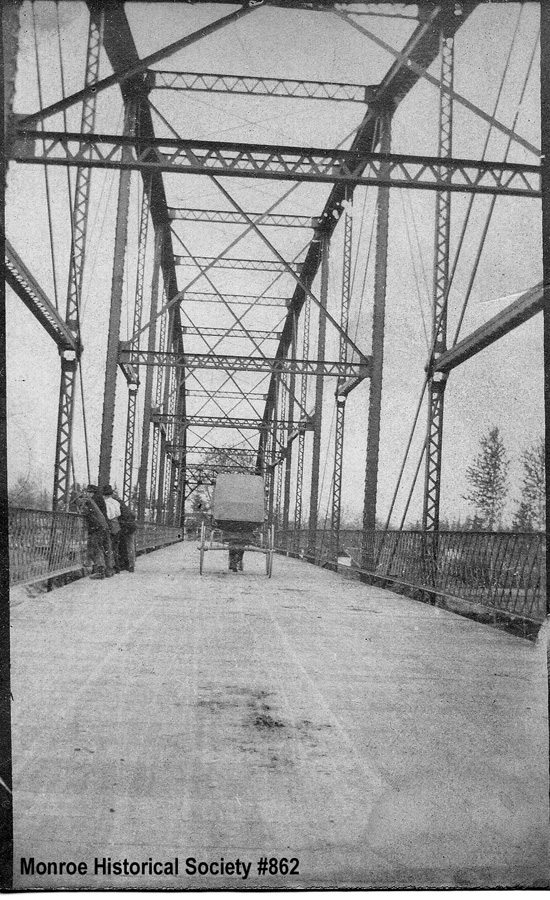