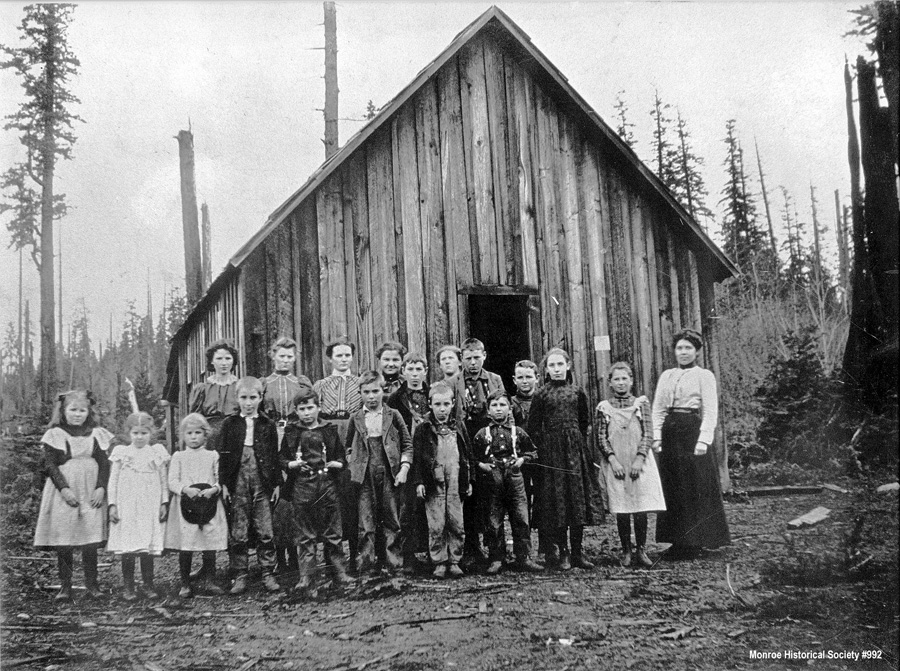 We had spelling school and literary society. The spelling school was conducted in the usual way, by choosing sides and as one missed a word he or she was eliminated from the string of spellers. The last to go down had the honor of being the champion speller of School District No. 40. The debating society was conducted by choosing sides and debating on the various issues of the day.

But there was much interest taken in the newspaper that was read at every meeting. The paper was edited by Will Ingram. He called it the Woods Creek Gimlet. The Gimlet had the distinction of being the only newspaper in Snohomish County east of Snohomish City. Snohomish City had a little bubble sheet called the Eye. The Eye was edited by Claton Packard. The Woods Creek Gimlet was written in longhand on foolscap paper, when the editor could get foolscap. If not, it was written on wrapping paper, or anything the editor could get, as the Gimlet had to be on time.

That winter we had a very nice schoolma’am from Marysville teaching the school. As usual there were a couple of young Romeos vying with each other for her favor. It was first one and then the other. The one who got to her boarding house first would walk with her to the literary society. One of these Romeos we will call “The fellow from up the creek.” The other we will call “the other fellow.”

On a particular night the fellow from up the creek beat the other fellow’s time and walked to the schoolhouse with the schoolma’am. The following verse was read in the Woods Creek Gimlet at the next meeting of the literary society (that was February 1892):

The fellow from up the creek and schoolma’am
Journeyed to the schoolhouse for debate.
It rained and there were no members present.
And the hour was getting late.

Then they started quickly homeward, they started with a rush.
The other fellow was absent, he was hiding in the brush.
As they passed, he hollered, until you’d think his neck was broke.
The fellow from up the creek says, “Give that calf more rope.”

Then they hurried homeward and were soon at the gate.
The other fellow came out of the brush, but just a little too late.
Soon there will be peace and quiet at the school on the hill.
As the cause of the Romeos’ trouble will be home in Marysville.