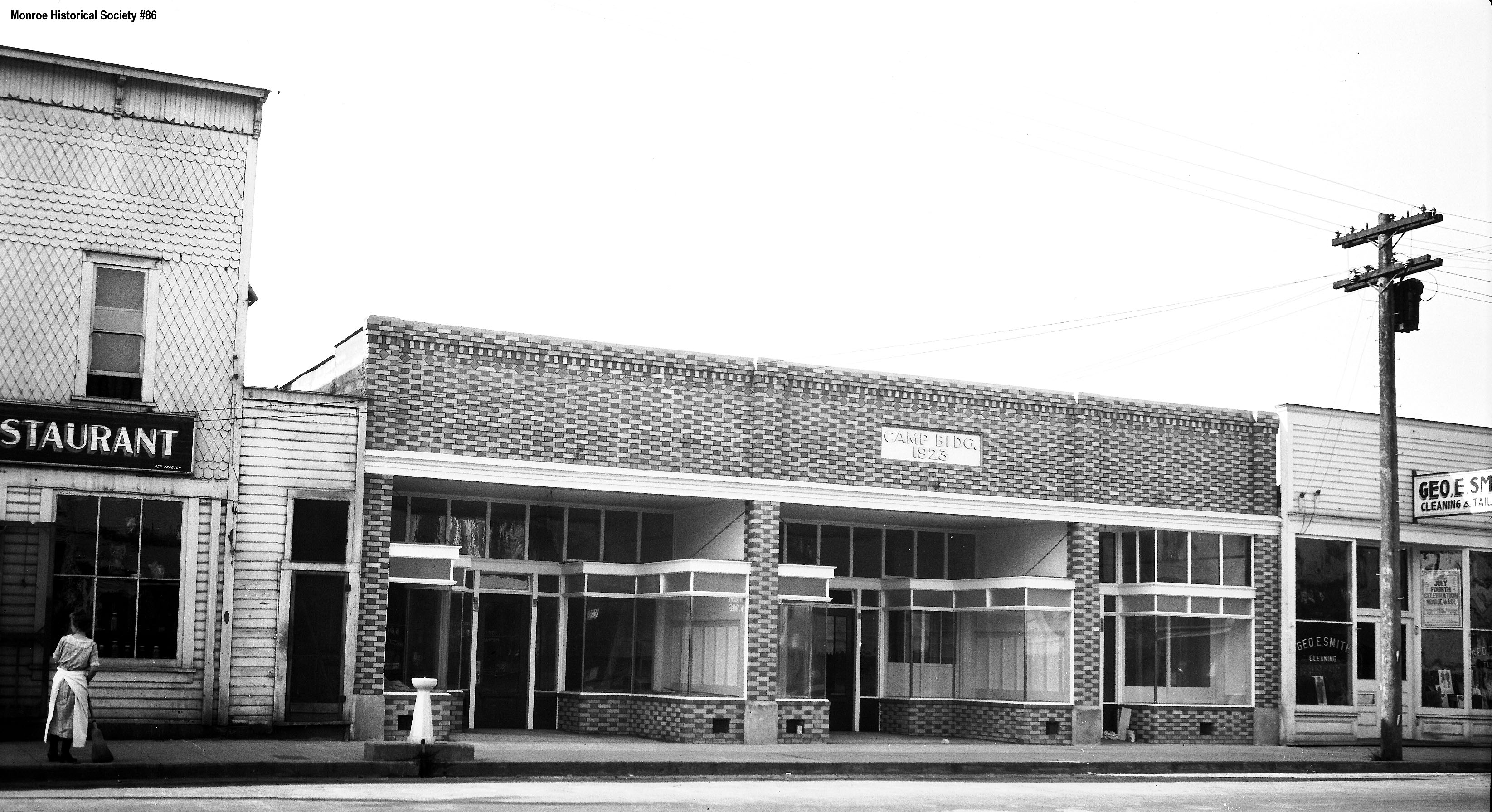 The restaurant at left would have been on the southwest corner of Main and Lewis Streets. Geo. E. Smith Cleaning and Tailoring is on the right. Scanned negative in two passes and joined digitally. Print size is 16.5x9. 2/03 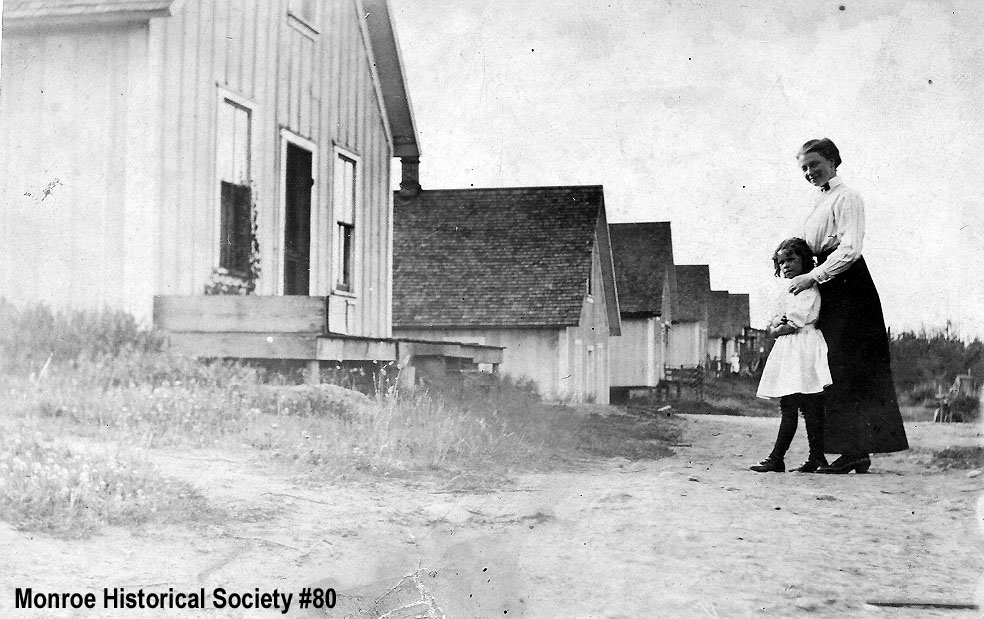 0080 – Main Street of the Three Lakes Mill Camp with the Mitchells, mother and daughter

Mrs. Mitchell and her daughter Katherine Mitchell (Dennis), then about eight years old, the future wife of Henry A. (Babe) Dennis, standing on the Main Street of the company mill town. Katherine Dennis remembered that the company houses were quite nice and that the mill town housed 200 to 300 people on its busiest days. The community, located northwest of Monroe at the south end of Panther Lake, had its own electric generating plant and a rail link with the Great Northern Mainline at the Woodruff junction, near the west end of Fryelands. It also had a link the Northern Pacific line near Machias. The Three Lakes Logging Company and sawmill began operation in 1903 and added a shingle mill in 1907. The sawmill burned in 1922. A small mill was setup after the fire and finally shut down in 1929. See photo #1995. 11/16 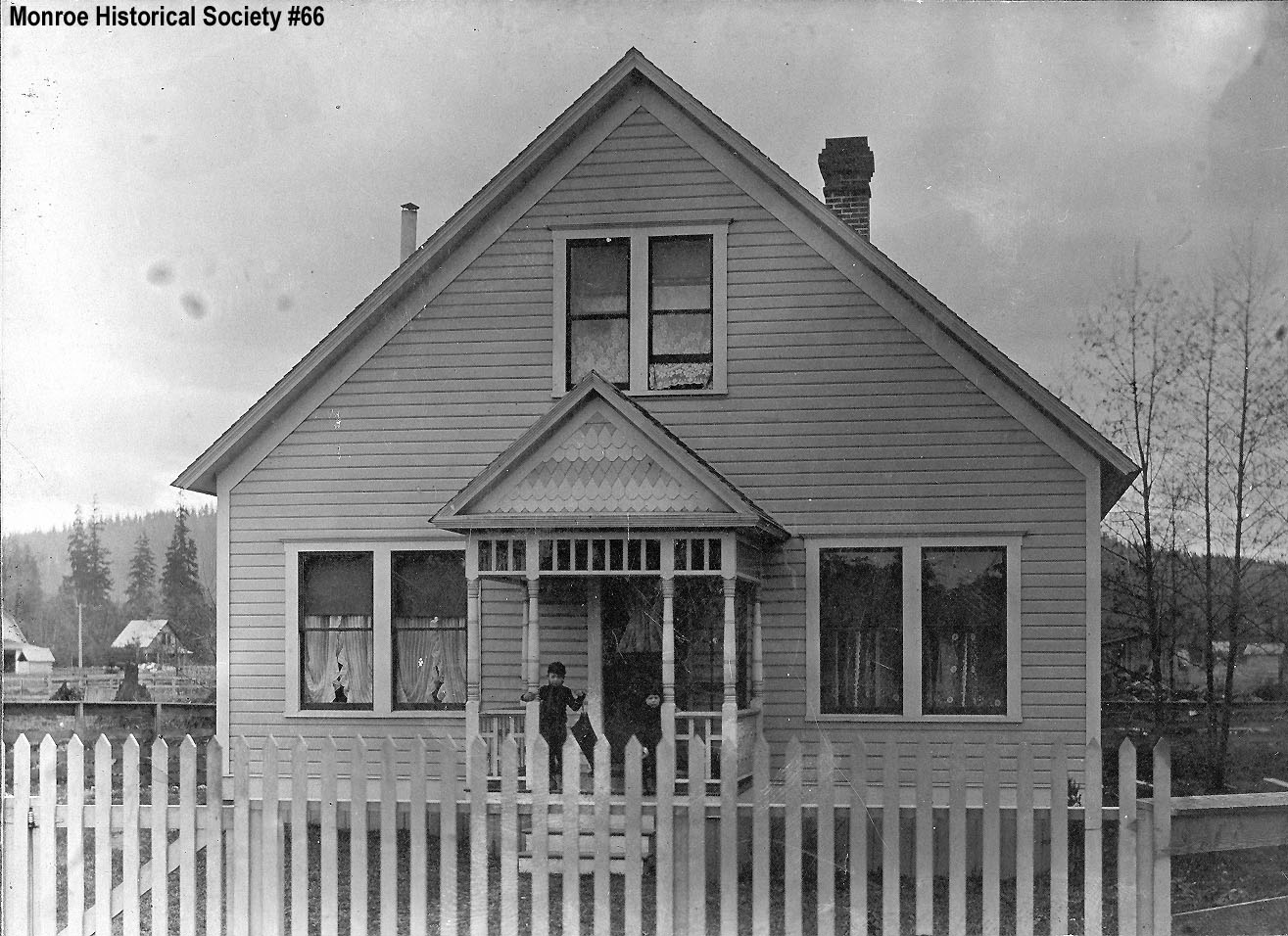 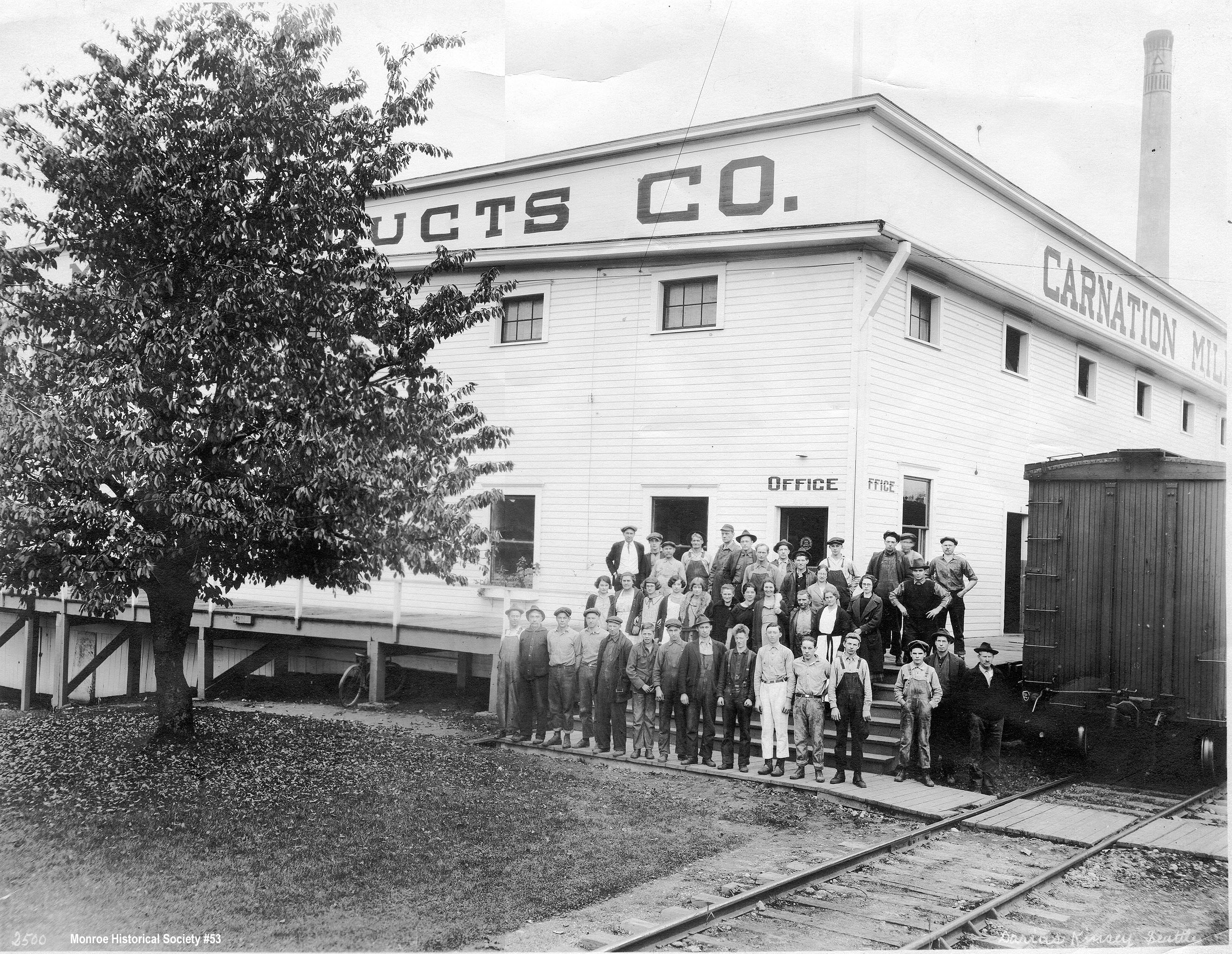 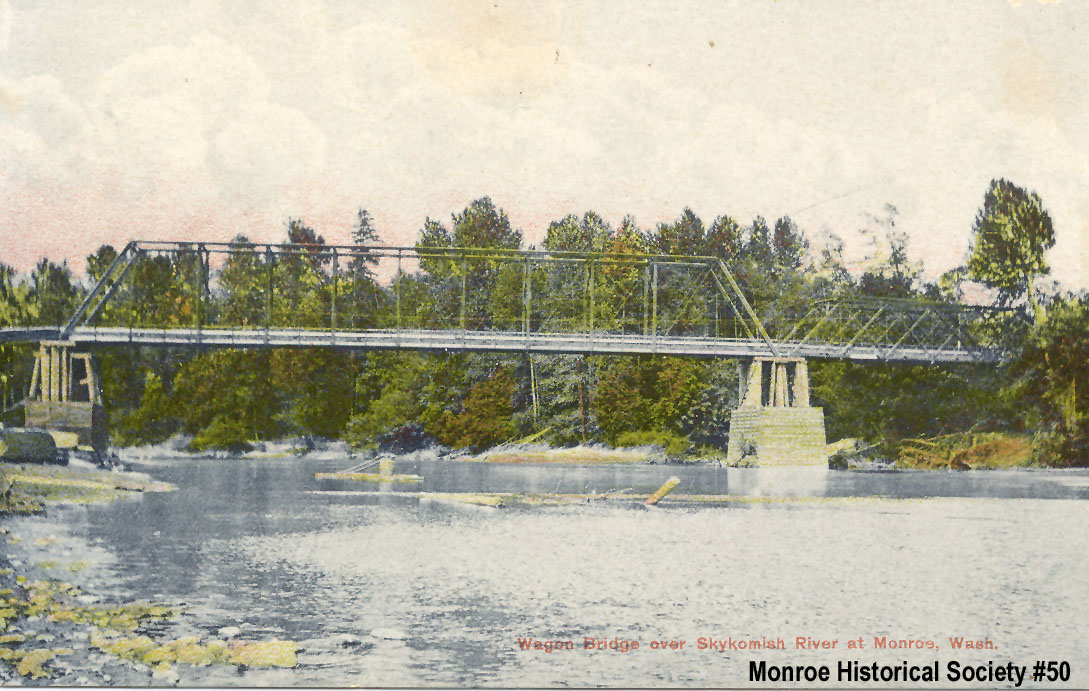 Appears to be the rebuilt bridge of 1905 as a second, smaller truss has been added to the south side (see photo #448). This color tinted postcard was printed in Germany and distributed by “Sprouse & Son, Importers and Publishers, Tacoma, Wash.” Until bridged, the Skykomish River formed a formidable barrier between the town of Monroe and the rich farms of the Tualco Valley. The financial panic of 1893 almost prevented the first bridge from being built, but it was finally completed in 1894 and rebuilt in 1905. The 150-foot span across the main channel, coupled with another 75-foot span across the slough to the south of it, and a 300-foot trestle connecting the two finally allowing for easy travel between Monroe and the Tualco Valley. 11/03 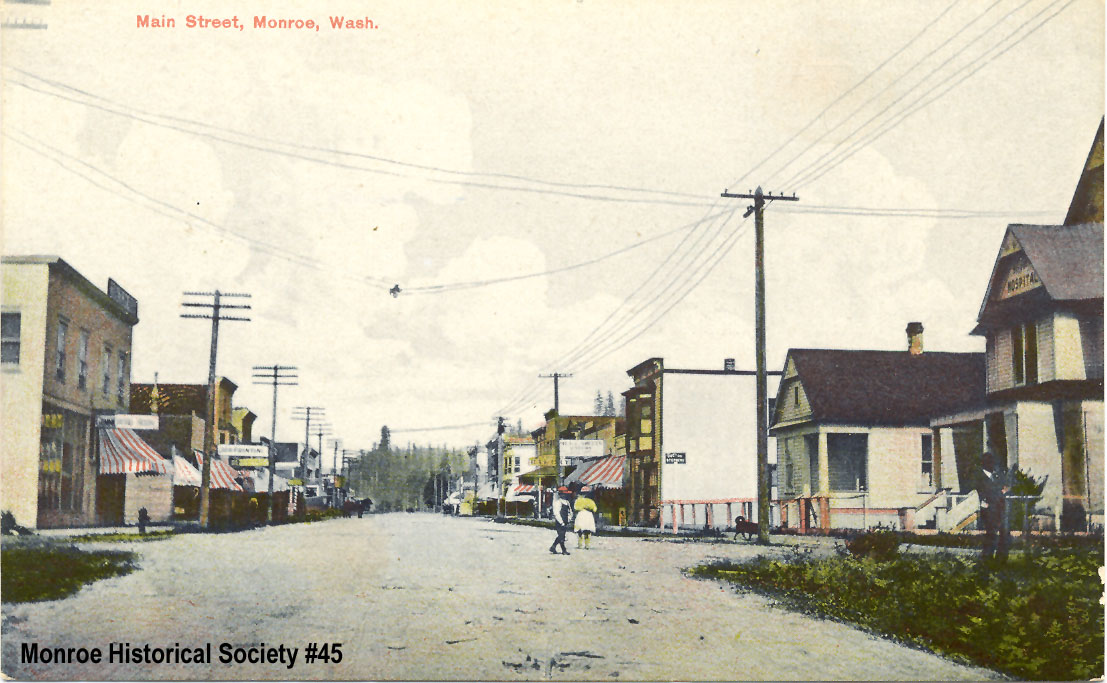 This color tinted postcard was printed in Germany and distributed by “Sprouse & Son, Importers and Publishers, Tacoma, Wash.” The photo it was made from, which is very similar to #382, was taken after additions to Stephens Hospital were constructed in 1906 and before the Savoy Hotel was built in 1910. Most signs are too blurry to read, but Stephens Hospital is the first building on the right. A sign for “Doctor Stephens” is on the side of the building beyond the hospital. Beyond it is a sign for “Palace Sweets Bakery” and then another “Bakery” sign. On the left, partway down the first block a sign “Job Printing” marks the Monroe Monitor Building, still occupied by the newspaper. 6/05